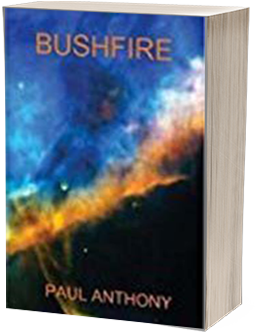 Bushfire is a terrifying thriller of greed and deceit. From the mean streets of Northern Ireland to the sun-drenched beaches of the Algarve, the plot unwinds to reveal a treacherous criminal conspiracy involving gangsters from the British Isles, Germany and South America. It’s all to play for when an off duty detective holidaying in Portugal recognises an arch-criminal from his past. The chase is on. Except the man has disappeared into thin air.

The action spans the oceans, from Colombia to the British Isles, and is set against the inferno of a raging drugs culture.  Cumbria undercover detective, Boyd, and the covert power of the State, battle against globally organised crime syndicates unaware that some amongst them have different plans: private and personal revenge. Who can be trusted in the investigation that follows?

The author received a commission for this, his second novel, from a London publishing house. Over 6,000 copies in paperback were sold but sadly the publisher went into liquidation. Thereafter, he decided to take the self-publishing route when the kindle reading device materialised. He is pleased that Bushfire reached #1 in the UK kindle store – crime fiction. It had been a publishing house bestseller so it was gratifying to see an independently published book for kindle do well. However, once the author became an independent many of his reviews were removed by the previous publisher. The story, however, remains a popular download despite the passage of time since first publication. From January 2021, the kindle version is offered for sale at 99 pence in the UK store and comparatively elsewhere.

Reader’s Review: A very well written fast-moving novel with a clever and detailed plot. The pages turn quickly with a good read. In this unique and excellent crime thriller, the author reveals an uncanny ability in that he is able to to take the reader with him on the journey. Loved it. A classy crime thriller which is as good as anything else I found on the shelf.  (Alan Pattinson, Reader)

Reader’s Review: Superb! From minor crime to international mafia-style criminality in one easy lesson. A fast-moving thriller in every sense of the word.  (Kennedy Keighley, Reader, screenplay writer, publisher)