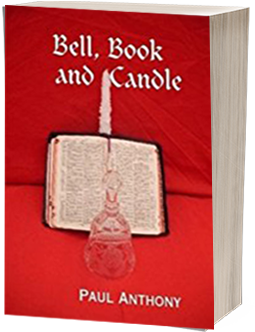 an ancient Silk Road in the Spin Ghar mountain range. From the red-bricked chocolate box skyscrapers of one of the oldest civilisations known to mankind, the travellers begin their journey. Fourteen hundred years of struggle and anguish arrive in the unspoilt backwaters of Cumbria’s Lakeland Fells and erupt in a bloody, deadly climax.

A simple bell, book and candle adorn the altar of a village church yet the parishioners are unaware of the gathering storm clouds that herald the arrival of the ‘Eternal One.’

Will the Cumbrian detective, Boyd, work out why it has taken since the seventh century for the problem to arrive in his back yard? It’s not until a child is kidnapped that Boyd realises he needs to separate out good from bad; normal from extreme, and the innocence of youth from the guilt of maturity. Boyd is fighting the biggest dog in the pack and the Shimmering Dawn is about to unleash its terrifying dogs of war.

Crammed with intrigue and drizzled with Machiavellian conspiracy, the plot dissects the culture and very existence of the Middle East as it gradually and passionately boils over into a turbocharged thriller of acrimonious conflict and religious aura when the history of yesteryear explodes with the reality of today.

Follow the dynamics of the plot from the foothills of Mount Sikaram in Afghanistan to the Fells and valleys of the Cumbrian Lake District. The journey is memorable, the action continuous, the result rewarding.

The image of a Bell, Book and Candle is the actual logo of the Metropolitan Police anti-terrorist branch (now Counter Terrorist Command) with whom the author once worked as a senior detective. A bestseller in the UK Kindle store, this novel is also one of the author’s best selling kindles in the US Amazon store.

Reader’s Review: You can’t beat a crime story written by a detective. Paul Anthony (a pseudonym, by necessity) was a top detective fighting the threat of terrorism, so he is ideally placed to come up with a fantastic story about Islamist terrorism. A fast-moving tale is told in great detail, without losing the plot. It’s full of facts and explanations and it’s written in a language we all understand, rather than that of bigwigs in the higher echelons of the police service or government. It’s a story that will also educate you…  The Station Sergeant, West Yorkshire.

Reader’s Review: This author not only walks the walk, he writes about it too. Excellent! Beyond comparison… Paul Tobin.Poet, author, and broadcaster.