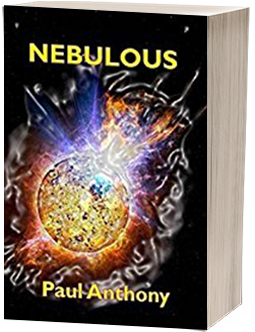 This is a book about the future. The story marks the UK crime writer’s first foray into the sci-fi genre. Is the book disastrous, or dystopian in the telling? That’s for the reader to decide, but the author thoroughly enjoyed writing it. And yes, there’s a disaster in the making. Here’s the storyline for Paul Anthony followers. You won’t be disappointed.

Ed Carter, an ageing career astronaut, is put out to pasture and dubbed a failure. Retiring to a quiet pub in rural Cumbria, he spends his time studying the stars in between pulling pints of beer for his thirsty locals. Envious of modern day space exploration, Ed can only watch from afar as his colleagues strive to reach further into the unknown.

Then, unexpectedly, everything goes wrong and Earth is plunged into an alarming series of natural, and unnatural, disasters. Only Ed seems to know the answer to the problem the world is facing, but no-one is listening to yesterday’s man.

Eventually, Sam, an astrophysicist, teams up with him and, together, they realise why the Earth is in danger. As the two race to save the world, a series of natural disasters shake mankind to its very core. In the final days of the planet, people still fall in and out of love, tears are shed, and hearts are broken. People are rescued to live again whilst others die in a sea of catastrophic despair. Personalities evolve, develop, and meet success and tragedy head on.

This is a chilling tale of human misery, heroism, love, hate, jealousy, cowardice, ignorance, disaster and scientific discovery. You see, out there, lurking in Space, is a run-of-the-mill everyday danger threatening human survival. There are those born to lead, and those born to follow. It’s time for someone to step up to the plate as the suspense reaches a climax, but is it too late?

Reader’s Review: A tale enriched by the characters of the President and Vice President of the United States of America, as well as Sam and Ed. The tale involves global leaders and is very good indeed. This would make a great film.   Pauline Livingstone, Reader and Book Critic.