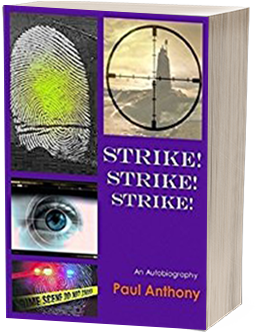 This has proved a very popular book for readers of true crime and biographies. Published in March, 2016, the book reached #1 in the UK  Kindle store in the first week of publication. It remained at #1 for 4 weeks. The book continued to occupy the TOP 100 and 18 months later,  in July 2017, the book was #24. In February 2021, the book dropped into the TOP 200. It is a Publishing House Bestseller and a Kindle Bestseller thanks to the support of the reading public. In the USA, the Kindle version reached #74

This is an autobiography from the front line of policing in the United Kingdom. It’s the true story of a sixteen years old boy from a city in the north who joined his local police force…

From tea-maker to spy catcher, from errand boy to counter terrorist detective.

Witness his journey via Cumbria Constabulary, the Regional Crime Squad, the Special Branch, the Anti Terrorist Branch of the Metropolitan Police, the Royal Ulster Constabulary and the Security Service..

AMAZON REVIEW: From the very start , this book rattles along, taking you on a journey that will keep you hooked until the end. Be prepared to go through all your emotions, as you are told of the many true stories that happened to the author during his service in the Cumbria Police. “Now’t ever happens in Cumbria?” Oh yes it does. From catching burglars, dealing with fatalities to espionage and terrorism, it has it all, oh I forgot, being chased by gorillas too. A great read.