The Legacy of the Ninth 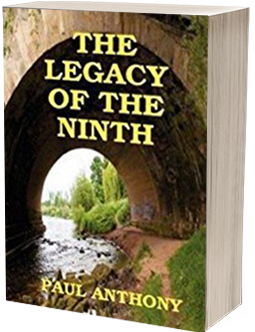 Packed with action, stacked with intrigue, and sprinkled with ingenious conspiracy, ‘The Legacy of the Ninth’ is a whirlwind thriller of bitter conflict and religious mystique, echoing through the centuries of time from the desert wastes of the Roman Empire to the luscious green valley of the River Eden and the land of the Lakes. Behold the noble Domitian:a valiant Roman Centurion who witnesses an appalling act of mass suicide in the Negev Desert, and Hussein who plunders a Jewish artefact from its rightful owner. Centuries later, Boyd, the detective, tries to find out why events in Masada are so closely linked with nearby Hadrian’s Wall. Indeed, against all the odds, Boyd realises that the links are so strong that prospects of peace in the Middle East are in danger of collapsing. Things can’t get any worse, can they?

Another best selling novel from Paul Anthony – this one reached #1 in the international mystery and crime genre of the UK Kindle store. It is also the author’s most popular book in the US Kindle Store. Once the author became an independent, however, many of his reviews were removed from the previous publisher’s website. From January 2021, the kindle version is offered for sale at 99 pence in the UK store and comparatively elsewhere.

Reader’s Review: What an extraordinary way to tell a story. Behold the runner!  From the beginning, the author provides a backdrop, introduces the characters, and then gradually builds the plot as the pages turn. There’s an amazing amount of history very cleverly weaved into this book. And it’s necessary in order to make something quite outstanding. From Roman Legions to the English Lake District via the Celts, the Arabs, Judea, the Bekaa Valley, and a dozen other stops along the way. With thanks to the runner who tells the story of course. Extremely well written. Well worth it.  (Kennedy Keighley, reader, screenplay writer, publisher)

Reader’s Review: I got sand in my shoes reading this one, and loved every minute of it. The story is like one of those old fashioned fireworks. You light the end, watch it burn a little, and then it explodes. Splendid.   (Alan Pattinson, Reader)

Reader’s Review:  An intelligent exposition of historical fiction at its very best. A quite brilliant and well crafted multi-genre tale that takes the reader on an incredible journey from the Ist century to the 20th century. Set in Masada, in the Middle East, the author tackles issues of religious conflict from the days of King Herod to the present-day problem of Islamic extremism, and carefully weaves the work into the 20th century before leaving the reader breathless: This is a slow burner that gradually explodes – page by page – A master craftsman at work…. Five stars….  (Magnusson, Reader)