The Sultan and the Crucifix 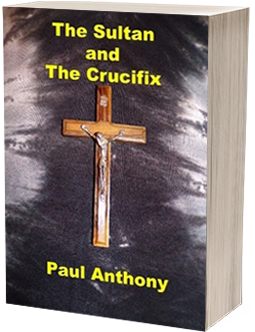 Boyd’s elite detective unit is brought sharply into focus when a direct challenge from above is made into his ability ‘to police and defend the freedom of the nation and its people.’

‘Elevating someone to the status of a leader carries an expectation of ability, commitment, creativity, honesty, and integrity in the person concerned. It consciously bestows upon such individuals, nobility, prestige, and recognition. Yet in order to betray those noble characteristics, there must first be ‘trust’.

Who would you trust the most? The crooked leader of a highly successful outlawed gang with a feared global reputation? Or the leader of an honourable organisation apparently intent on delivering legitimacy, justice and dependability? Would you tell someone a secret; a secret that might unhinge the world order if the details of such confidence fell into the wrong hands?

Herein lies the crux of a true-life crime thriller which sees Boyd, the Cumbrian detective attached to the nation’s Special Crime Unit, chasing down an assassin responsible for multiple deaths whilst simultaneously trying to identify the latest threat to the nation’s security. Is there a connection?

Who is the Sultan? Is he connected to the man who wears the Crucifix? Is he really the best there ever was? As the mystery develops, Boyd distrusts those in authority above him and steps out of line to do things his way. Not always the right way, often the controversial way, usually the dangerous way, and not always the successful way.

Boyd calls upon a wise old Shepherd for advice. Someone needs to get a grip on things before it all goes to pot. Step forward the Bishop and an aura of religious mystique that trickles through the book as the cultural identities of the main players come into play.

There’s no one quite like the Bishop. They are a rare breed. But who is the Bishop and what is their role in the dual story that you are about to read?
A thrilling, mysterious, action-packed novel awaits those who enjoy ‘Boyd’ and the people surrounding him. Indeed, it’s two stories for the price of one. Set in London, Cumbria, and elsewhere, the connection between them is a man called Boyd, the concept of ‘trust’, and the sprinkled controversial components of ‘leadership’.

Reader’s Review: An awesome plot with extensive background research that suggests to me, as a regular reader of this particular author, that this is one of his best works. Unputdownable! What a plot! Loved it. (Pauline Livingstone, Reader and Book Critic)

Reader’s Review: Another good plot here. Wicked in places. Covert and overt at the opposite ends of the track. But a great read which I thoroughly enjoyed. (Meg Johnstone, Reader)